Your health & safety are our priority. See the latest updates in our Sailing Advisory.  View our Health & Safety Protocols & Good Faith Guarantee.
We are experiencing heavy call volume. If you have an existing booking, please fill out our  Contact Us  form. If you want to make a new booking, Request a Reservation here.

One of Earth’s grandest wildlife experiences

Sail to the high Arctic archipelago of Svalbard, the best place on the planet to see polar bears—wild and majestic in their native habitat. Over the past 30+ years, our ace spotters have given our guests multiple opportunities to experience close sightings. In addition to the bears, we’ll have the opportunity to see and observe walrus, fascinating creatures and wonderful photo subjects, reindeer, elusive arctic foxes, fur seals, and a glory of birds. The islands of the archipelago are ideal for walking, with some hikes revealing artful, sculptural arrangements of whale bones on pebbled beaches, and the ghostly remains of trapper’s huts.

TRAVELING AS A GROUP

Sail into the ice with a top expedition team of naturalists who illuminate all you see. Your expedition leader will enable Zodiac cruises and kayak expeditions, too—enabling you to experience the wonders with all your senses, at water level or eye level. You’ll have a choice of activities, plus your choice of naturalists to join—for a movable feast of personalities, insights, and interests. Our day-by-day exploration of Svalbard is flexible. We rely on our decades of experience here to help us read the climate conditions and ice to find where wildlife is most active.

Ready for the adventure of a lifetime?

Certain offers may be combinable, up to two savings opportunities, except where noted otherwise. For example, travel with a group of 8 or more on back-to-back expeditions, and take advantage of both savings.

We believe sharing an expedition with your kids or grandkids is a life-enhancing experience. So take $500 off for each child under the age of 18.

Save 10% on any consecutive journeys taken on board one of our expedition ships. This savings is applicable on voyage fares only, and are not valid on extensions or airfare.

TRAVELING AS A GROUP

Save 5% when traveling as a group of 8 or more people. Take advantage of these great savings, while enjoying traveling with your friends and family. This savings is applicable to voyage fares only, and is not valid on extensions or airfare. Deposit, final payments, and cancellation policies for group travel vary from our regular policies.

Travel on this itinerary from $11,990 per person

Make the most of your proximity and time

The rich landscapes of southern Norway, including Sognefjord—the longest and deepest fjord in Norway—are the ideal addition to your adventures. Thundering waterfalls and snowy peaks offer wonderful photo ops.

NOTE: On some voyages, this extension runs in a reverse direction (Oslo to Bergen). Please contact an Expedition Specialist for more information.

Happy Canada Day! It was foggy when we woke up this morning, which gave the rocky bay a quiet and heavy feeling. Before breakfast, the staff scouted the shore and found some thermal springs while guests on board began spotting bears along the beach. By the time breakfast was over, the fog was lifting, we had several bears in sight, and our expedition leader Brent had prepared a route over the rocks to the beachside hot springs: a good start! We spent the morning Zodiac cruising as the weather continued to improve. More sun, less wind, and bears on the beach for every group to watch. Meanwhile, a few intrepid guests bathed in the natural hot water springs – the equivalent of hot tide pools. Our hotel team prepared a very special lunch today to celebrate Canada Day. The dining room was decorated with flags, and the Canada-inspired dishes included Nanaimo bars and a cake with Canada flag icing. Our afternoon at the Chazhma River began when we met Nina and Sasha, the two rangers stationed here. They live in a small cabin with solar power and a diesel generator. From here, they patrol the park and gather ecological information to share with researchers. They warmly welcomed us, and Nina even joined the long hikers to explore around the nearby river. The fields of flowers here were extraordinary. The nearby hot springs warm the ground and help to provide an unusual habitat that gives this entire area a lush garden feeling. Every group had an area to explore. We arrived to recap full of chatter and energy after another beautiful day here in Kamchatka.

What a way to cap off our final day exploring the archipelago of Svalbard. The morning was spent enjoying the scenery of Poolepynten. We were surrounded by beluga whales and walruses before we navigated into St. Jonsfjorden. There, we explored beneath towering mountains and Zodiac cruised among glaciers—and the bravest of us made the chilly polar plunge. As guests took a breather and began to reminisce about our incredible adventure, we had one more—rather large—surprise: a blue whale!

A simply delicious day on the Kamchatka Peninsula began with a bear sighting followed by our first glimpse of a Stellar sea eagle! This was to be a theme for the day, and we began our walks ashore at Morzhovaya with appropriate caution and excitement. Thankfully no bears witnessed on shore, but many signs were found and rare birds spotted. The afternoon led to our repositioning to the Zupanova River where the Zodiacs were deployed for an extended cruise and low and behold if we didn’t get a phenomenal look at a coastal brown bear and great views of the legendary Stellar sea eagle. The volcanos of Kamchatka watched over the proceedings and peacefully smoldered on the horizon.

Fulmars glided low over our wake, cocking their heads at us then speeding on to fall in line with the stern, as we made our way into Bellsund. They were out constant allies during our expedition in Svalbard, their silent dark eyes observed us, as if they knew the storm to come. Bellsund was the only fjord around Svalbard currently devoid of thick fog, which was why we were steaming steadily on to seek refuge behind the mountain of Klokkefjellet. The wind lapped at our tail but luckily, we were able to find a calm bay inside the fjord system, which seemed perfect for an exciting morning of kayaking. As breakfast ended, we headed out onto the kayak platform and then we were off, into the deep turquoise fjord. Steep cliffs of scree encircled us as we kayaked in the wind and chop. The air was filled with darting birds—brunnichs guillemots, little auks, and kittiwakes—all buzzing back and forth from nest to sea. On shore, a group of us headed off to explore Forsbladodden, an exciting landing that yielded close views of reindeer and a surprise arctic fox, running back and forth across the moraine in search of food. After a wonderful morning, we headed further into Bellsund. After lunch, to our great surprise, we had an incredible close encounter with a polar bear. The bear was wandering across a small island in the middle of the fjord. The excitement on the bridge was palpable. We hadn’t expected this encounter here. The large, healthy looking male hung around for a while, idling his way across land as we watched. The reindeer close by him seemed completely unphased by his presence. By far, this was the closest view of a bear that we’d had thus far. Gasps and woots filled the air and elation rang through the ship. By the time we had begun to approach our planned landing site, Camp Millar, the wind had picked up significantly. Gusts of 40-knot winds were whistling over the water and whipping up the sea into a frenzy. The fulmars soared by, at times almost vertical from wingtip to wingtip, hanging in the air. We managed to land and get everyone ashore for a wander around one of the most intriguing landing sites so far. The beach was littered with whale bones, driftwood, and artifacts from trapping days. Farther up the hill, we saw fox dens and fox cubs playing on the tundra, reindeer, and nesting guillemots and little auks in the scree slopes. An arid yet beautiful tundra landscape. We came back aboard, cold but energized. After dinner, we watched the voyage film preview and finally, guest and standup comedian Alex Moult entertained us with a special routine.

It was a little tough for this photo instructor to be sidelined with a knee injury when I’m used to getting out and about with guests on landings and Zodiac cruises. On the bright side, it gave me even more time to contemplate the stunning landscape of Svalbard from the outside deck. At recap, I gave a short presentation on features of the iPhone camera that many people don’t know about—how to adjust the exposure to best capture high-contrast scenes, for instance. All the images in this report were taken with an iPhone. It’s a wonderful and convenient tool for telling the story of an expedition, and as the saying goes, “the best camera is the one you have with you when inspiration strikes.” More often than not, in this digital age, it’s the one in your pocket.

View our brochure for more details 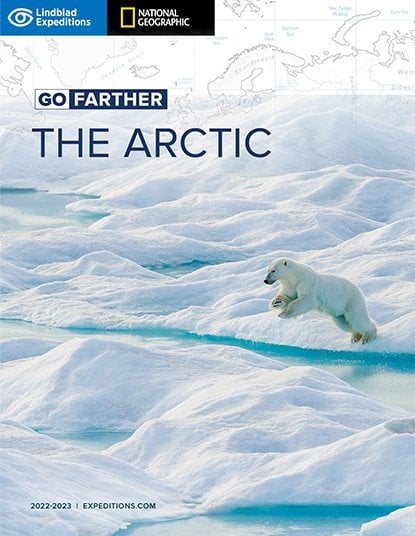